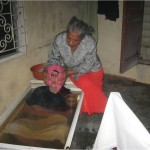 Treating Filariasis With a Fever Treatment

Diana, a Romanian missionary was tested positive for filariasis, a tropical disease where parasites from an infected mosquito enter the circulation affecting the lymphatic system. Eventually one is left with a permanently swollen feet or breast or hands, because there is no cure for the disease. She came to us in search for help already with a swollen foot, and pains in all joints. We used revulsive fomentations at first with lymphatic massage but knew that the only thing to completely eradicate the parasites was prayer of course and fever baths. We, as may be expected had no tubs, so we searched for a substitute, at  first we thought about a barrel, then someone told us about an old fridge, we were able to get one of them and began fever treatments with Diana. The treatments had to be done nightly for the parasites came out into the blood in the night. Also we had to use the fire side to heat the water, because we don’t get hot water through the taps. We were only able to do 20 treatments over a period of 2 months due to circumstances. Nevertheless when Diana left us, she was in good shape, her foot was normal, and her once painful joints were now pain free. She went back to the hospital for blood work and was tested negative for filariasis. It was a wonderful affirmation of God’s appointed methods.

Listen to the Diana’s audio testimony on MP3: